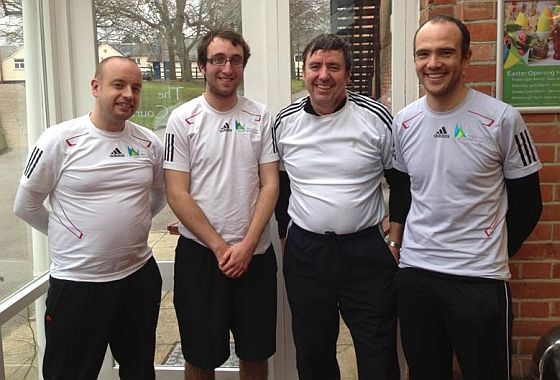 All smiles as the boys came out on top against Westmorland Park (l to r, Iain Hartwell, Tom McIvor, Paul Stephens and Richard Bodkin)

One of the toughest, gutsiest, aggressive and most passionate battles I can remember for many a time saw Wellington secure a winning draw against our bogey team Westmorland Park by 6 sets to 5 on a chilly windy Sunday at Wellington.

It’s an absolute privilege and a pleasure playing in the Men’s team with such a committed group of players and we dug deep today to secure 2 precious league points which puts us in Joint No.1 position in the Winter League.

The game saw 6 tie breaks in the 4 rubbers, 3 championsip tie breaks deciding 3 of the rubbers and the match lasting over 3.5 hours so you can see how close it was.

We were also playing pairings who have never played together before in the league so especially pleasing.

Richard and Tom played No.1 pairing and narrowly lost to their No.1 pair but comfortably beat their No.1.

A lot of tennis and a real battle which sets things up for the final match against Wargrave away on the 7th April.

Lots of information this week on Winter and Summer league matches and other Men’s tennis.

It is now getting down to the business end of the season and a 3 rubbers to 1 home win against RSF3 has seen Wellington move up to 2nd in the league behind Westmorland Park and just ahead of Magnet. The current league table is showing incorrectly as Magnet had a losing draw today at Royal Ascot and should be on 9 points not 10 as shown currently (see below) and http://lta.tournamentsoftware.com/sport/draw.aspx?id=EDBB59F4-E289-400E-80B9-20BB7A71DF53&draw=7 for all the results.

Great performance again from Richard and Nick to win their 2 rubbers today. Tom and Paul won their first rubber comfortably but lost the second against a good RSF first pairing who it looks were playing down from their 2nd team.

Wellington are playing Westmorland Park at home on the 10/10 in a fixture which could ultimately decide the league as our remaining fixture after that is against Wargrave. We’ll also know more after they enter their result from their match against Sonning today.

We’ve now got details of our Summer matches which start on the 20th April and can be found at http://lta.tournamentsoftware.com/sport/drawmatches.aspx?id=F5A4DCBE-C9C6-41E1-84E0-9C41ABD72C03&draw=32

As the days are now drawing out and hopefully getting warmer we are re-visiting a midweek Wednesday evening session for the Men’s teams. Please e:mail Paul if you’re interested.

The Men’s Saturday morning session is also running well and remember open to all. Again please e:mail Paul if you’re interested in joining in.