We finally got to play a game in brilliant warm sunshine!

A fantastic morning’s weather for our last match of the summer league v Purley 2 at Wellington.

Great to have ‘young guns’ Tom McIvor and Nick Proffit playing with me and Andy Holley respectively. 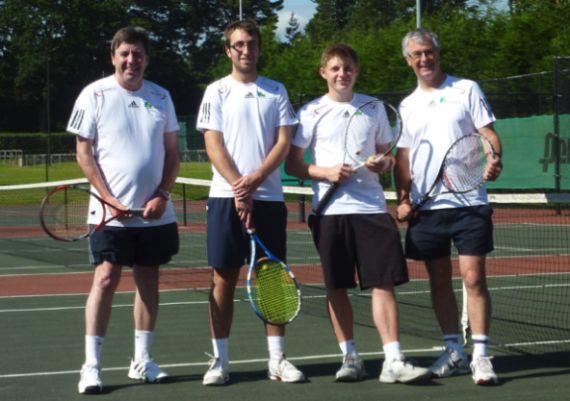 A close game with Purley #1 pairing for both of us meant 2:2 on rubbers, 2:2 on sets and Wellington getting a winning draw by 37 games to 28.

Wellington have finished 3rd in the league table and a respectable end to a somewhat disrupted season.

Many thanks to all the players for the support to the team over the summer as we now look forward to a couple of months rest and then it’s the Winter league.

Hands up I’ve been somewhat busy over the last few months which has meant my Blog has been very out of date as we’re now well into the Summer league season and in fact coming to the end.

It’s been a nightmare for fixtures with the bad weather which has seen numerous cancellations of both the original and re-arranged fixtures and our final match against Purley which had been scheduled for the 28th April will now be taking place on the 22nd July.

It’s also been an interesting time with player availability or rather unavailability as Tom and Nick were committed to University until only recently but a big plus has been the arrival of Andy Sayer. Anyone who has played either with or opposite Andy will know what I mean as he hammers down some pretty pacey serves and hits the most amazing ground strokes. I had the pleasure of playing with Andy Sayer against Ascot and Nirvana and we had good wins in both these matches.

There’s no doubt that Andy and Richard Bodkin have really raised the bar in terms of quality of players with the only challenge being to get them engaged with their work and personal schedule which saw Richard in South Africa for a long time ruling him out of the summer league program.

There continues to be a challenge in putting out a team with people’s commitments and I’d like to say a big ‘thank you’ to the following players who have supported and represented the team John Lovegrove, Will Macdonald, Mike Rosen, Andy Sayer and Martin Woodbridge. We’re hoping also to get Tom McIvor and Nick Proffitt playing their first summer game this Sunday and thanks to them for their commitment.

I’d also like to recognise John Bycroft for his commitment to the cause and for the effort he has been putting in to his game which has got him in the squad on merit and Iain Hartwell for his similar involvement.

Now for the status in matches.

We beat Royal Ascot at home, had a losing draw 2-2 (lost on sets) to Nirvana, lost to Woolton Hill, had a walkover v Caversham and have our re-arranged game v Purley this weekend and the likelihood is that we will finish 3rd in the league.

Now looking towards the Winter leagues it’s a chance please for everyone to come forward if you’re interested in playing in the Men’s team. As things stand right now we’ll probably enter just one team but if there is sufficient interest we could consider a second team.

On another note it’s been really good to see how the 10.30 Saturday morning session is developing with a good crowd of people coming along and having fun despite the weather.

That’s it for now. A Vet’s match tonight weather permitting and work e:mails to attend to in the meantime.