Well it’s been a long winter in more ways than one with the Saturday sessions and Men’s Winter League matches postponed on several occasions due to bad weather.

I’m pleased to say however that the Men’s team finally got round to playing the match originally scheduled for the 7th October away at Magnet, Maidenhead over the weekend and enjoyed another winning draw by 39 games to 31. 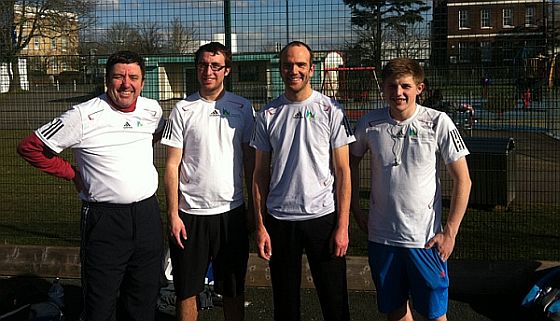 All smiles from Paul, Tom, Richard and Nick after the match at Magnet on Sunday 17/2/13

Richard Bodkin and Nick Proffitt played 1st pair and enjoyed a ‘Double Bagel’ over Magnet’s 2nd pair! Paul Stephens and Tom McIvor played 2nd pair and won one rubber and lost one. It was good to finally get a game in glorious sunshine although those who have played at Magnet will know that it is perhaps one of the more interesting places to play due to its location in the centre of Maidenhead next to a skate board park!

We’ve now played 4 of our 7 fixtures for the Winter League and have 2 home games against Westmorland Park and RSF and 1 away game at Wargrave.

If you want to check league position and results please click the link http://lta.tournamentsoftware.com/sport/draw.aspx?id=EDBB59F4-E289-400E-80B9-20BB7A71DF53&draw=7

We’re also planning to get the Saturday morning sessions up and running again starting this Saturday at 10.30am. Once the clocks change we will also re-visit the Wednesday evening Match practice session.

Thanks to all those who’ve supported tennis over the Winter months and made themselves available for the team.

Also best wishes to Paul Gozzard for a speedy recovery following his hip replacement and we look forward to seeing Paul down soon and congratulations to Richard Bodkin following his marriage to Gina in South Africa over Christmas.

That’s it for now and looking forward to more tennis as the weather hopefully improves and the days get longer.

Thanks to Richard Bodkin for taking over Captain’s duties for the home match on the 18th November v Slough whilst your truly was catching some November sunshine in Grenada. It was a very close match with Wellington gaining a winning draw on games by 41-39. Thanks also to other members of the team on the day Nick Profitt, Tom McIvor and Iain Hartwell.

Next scheduled match is away to Sonning on the 9/12.